Kapil Seshasayee is a Scottish Indian artist and musician who is releasing his first music album “A Sacred Bore” on September 14th.  Kapil was born in Tamil Nadu India and moved to Scotland when he was a year old. Having always had a passion for music, Kapil works with Scottish bands as a promoter and was also heard on Bobby Frictions show on the BBC Asian Network as the ‘featured artist’ for two weeks in July this year.

Kapil’s much-anticipated music album, as discussed on Bobby’s show, explores oppression within the Indian caste system – this was also where I heard about Kapil and his work on caste for the first time.

The album consists of ten tracks with each song carrying a profound message and story on oppression and caste. The first song on the album is the title track ‘A Sacred Bore’ and its where Kapil acknowledges his ‘own caste privilege’ as he put it to me in our conversation.

The second track Ligature Hymnal is a long form narrative about an honour killing and was inspired by the hit BBC Drama Murdered by my Father 2016.  The third track,  Exemption Hum, is a musical piece inspired by Satyajit Ray’s Sadgati 1981 or Deliverance.  Satyajit is one of Kapil’s all-time favourite filmmakers and heroes. The film explored the caste system intrinsically and acted as a major inspiration for this song. I would also like to give a special mention here to Diljeet Bhachu, who plays the flute beautifully on the albums second record.

Ballad of Bant Singh, track four, is a favourite of many as it pays homage to the Punjabi activist Bant Singh who lost his limbs after he reported the rape of his daughter by upper caste men in his village. Despite having such atrocities inflicted upon him, Bant Singh is still alive today singing protest songs about caste in villages.

The fifth track, Agni is best described as an interlude and is inspired by the European film Persona 1966 by Ingmer Bergmen as it explores themes of duality, and personal identity. The song is named after the holy fire ‘agni’ as referred to in Hindu mythology and points to this notion of cleansing or purification – the very ideology that forms the basis of casteist rhetoric.

Track six, The Agitprop is about the alt-right joining hands with upper-caste Indians in the diaspora and also makes reference to the t-shirt sold to right-wingers at the Charlottesville riots in America. The t-shirt as seen below, had a Hindu slogan ‘Surf the Kali Yuga’ written on it, meaning ride the times of chaos, flux and change. 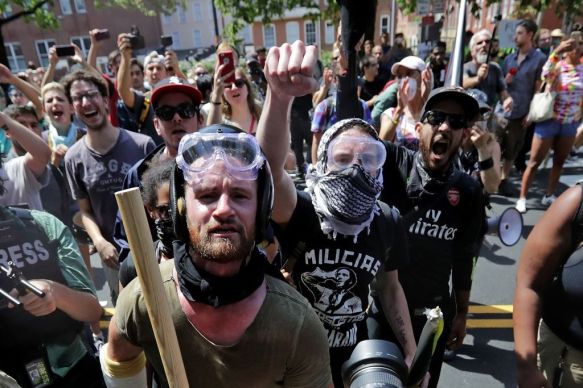 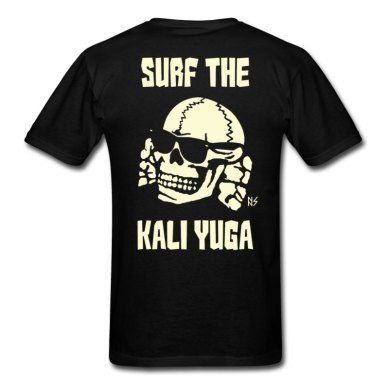 Charlottesville rioters and the t-shirt sold to right-wingers.

Track seven, A Glass Wig is about acknowledging caste as it hides in plain sight, something Kapil witnessed many a time growing up. Track eight, Kali, is about the Hindu Goddess of destruction and destroyer of ignorance while the ninth track on the album Caustic Wit, is another song that addresses the experience of growing up Brahmin from Kapil’s perspective. The message here is to acknowledge that caste is a real issue and something not to be joked about.

The final track on A Sacred Bore is Hatred in the Belly, an instrumental free jazz inspired piece with the songs title borrowed from a book of the same name. The book, looks at how upper-caste Indians have appropriated social reformer Dr Ambedkhar’s teachings on caste and thus a significant reason for the songs title. Hatred in the Belly is also a popular phrase in Telugu (pronounced KaDupulo Kasi) and is taken from a speech delivered by poet Joopaka Subhadra in Hyderabad India which talks about Dr Amedkhar and his work. 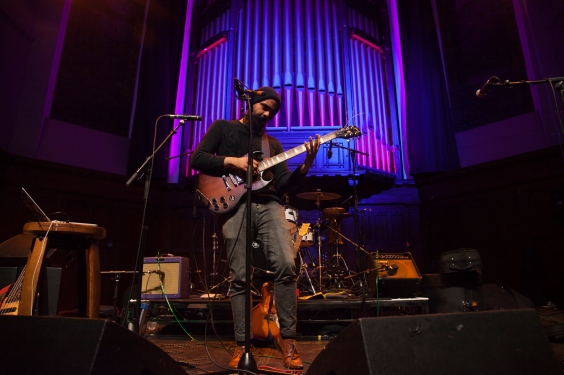 It was refreshing and interesting to hear Kapil address the caste system and privilege as a problem that needs addressing in a way that others could not and the answer to why he did, quickly became obvious to me as I started to interview him.

You’re making a music album on the Indian caste system tell us how and why this came about?

I witnessed frequent hostility between two Indian women in my place of work which had become so heated that it made one of them quit. On encountering one of them a short while later – I learned that almost the entirety of the abuse she faced over the time she had worked there had been based on her being of a lower caste. Despite being told numerous times that caste-based discrimination was apparently limited to third world countries and an era we had long since ‘left behind’, I had just witnessed it in diaspora and had to investigate…

Have you experienced caste discrimination in the UK?

As an upper caste Indian living in the diaspora – I’m going to face little (if any) caste discrimination. However, I have witnessed prejudice based on caste towards others throughout my childhood which I’ve only recently reflected upon properly. It often hides in plain sight – relatives making snide comments at waiting staff (lower caste or ‘untouchable’ Indians are often employed in service roles) or older Indians asking you for your second name before anything else and suddenly treating you with kindness when they learn it’s a Brahmin name. Caste’s influence both at home and in diaspora is deeply rooted.

Some people argue that caste does not exist in the Sikh community as the faith does not permit discrimination on the grounds of caste, therefore it is not an issue. What is your response to that?

The fourth song on the album is about a Sikh activist & protest singer in the Punjab who has continued to fight against caste despite losing his limbs in an altercation with upper caste villagers. In researching his life for the album – I learned that while Sikhism had worked to stomp out caste based-discrimination early on, gradually Sikhs originating from different Hindu castes would begin to dine separately, then pray separately before eventually imposing the exact hierarchical structure of caste that they sought to escape in the first place upon its followers .

My live band comprises 2 devout followers of Sikhism and they can attest to the lasting influence of caste. Gurdwaras are still segregated along caste lines, there is still community stigma around inter-caste relationships. Ending caste discrimination does not end caste inequality.

How can British Asians work towards eradicating caste related problems within their communities?

We must work to dismantle and disrupt the engrained perception of caste hierarchy. Actively breaking down the divides so that Asian communities are more integrated across caste-backgrounds is paramount. As tricky as it can be to navigate our dual identities living as Indians in the west – we must take our first steps at home – calling out casteist rhetoric even when uttered by our loved ones.

Why do you think the idea of caste has migrated to the UK?

I feel that it stems from fear of the ‘other’ – anything that is seen as diluting a family’s set of socio-cultural, religious or traditional practices is seen as a threat. Classism is also rife – casteism is built on economic hierarchy, and similar hierarchies exist in UK culture.

Some academics and individuals argue that caste is a British or western construct from the days of imperialism. Would you agree?

The British Raj were instrumental in creating the iteration of caste which persists today, however the notion of caste and its belief structure predate British intervention. A lot of casteist rhetoric is rooted in interpretation of the archaic Hindu scriptures known as the Laws of Manu which date from around 200 BC.

What do you hope to achieve through your music album?

I hope to bring caste to the mainstream platform of discourse that it deserves so that we can take the first steps toward proposing its destruction all together.

Why choose music to tackle the issue of caste?

Music has always been my primary form of expression so I felt I could most confidently convey the nuances of the discussion by writing songs about them. It also makes an otherwise inaccessible topic easier to engage with – A lot of people who have enjoyed the singles released ahead of the album have then gone on to read about caste because they wanted to engage with the music on a greater level.

Is there any parting message you would like to leave us with?

Anyone who tells you a system of oppression is either relegated to the third world or to a bygone era likely benefits from it.

Photographs provided by the artist.