In 2020 Ramesh Sippy’s superhit film Sholay turns forty-five. The journal of South Asian Popular Culture have called for papers and presentations to be submitted for its one day symposium at Birmingham City University. Academics and fans of popular Hindi cinema will come together to celebrate and debate the 45th milestone of one of Indian cinemas most iconic films Sholay.

“Papers presented at the symposium will be invited to be developed as peer reviewed articles or Working Notes entries for a special issue of the journal to be published in 2021.”

Sholay (1975) written by duo Salim-Javed and directed by Ramesh Sippy, is one of the most popular films of modern Hindi cinema. With its famous filmi dialogues celebrated across generations, the iconic characters of Gabbar, Basanti, Thakur and best friends Jai and Veeru have since become a popular culture phenomenon around the world.

The films memorable dialogues – “Arrey Oh Sambar! (Hey, Oh Sambar!)” “Kitne Aadmi thay? (How many men were there?!)” “Ab tumhara kya hoga Kaalia?! (Now what will come of you Kaalia??)” and “Chal Dhano! (Hurry Dhano!)” – just to mention a few, live on in contemporary cinema and South Asian entertainment media.

The surge in digital media has led to an online culture of meme sharing and a place to enjoy short comedy sketches created by influencers and celebrities. Our beloved Sholay dialogues have made their way to our timelines with millennials often adding their own twist to the characters and filmi dialogues. This is an example of how language has the ability to carry history and generational conversations through the evolving art of communication.

The celebratory applause for Sholay’s dialogues can be further witnessed in a rather amusing Indian TV advert for the chewing gum brand Orbit as seen below.

The Sholay hysteria and parodies have not always gone down well.  Actress Hema Malini who played Basanti in the film actually walked out of an Indian reality tv dance show after a badly performed comedy sketch on Basanti and Gabbar was received as an insult by the actress.

Such is the love and admiration for the movie Sholay – maybe these memes and parody sketches should carry a trigger warning for all the creatives involved with the film!

Sholay is a wild west masala movie packed with horse chases, rivalry, train robberies, romance, melodrama and comedy. What stands out about this film are the iconic characters and dialogues that come with them – and of course the music.

The lyrics have a life of their own, the songs and characters travel back and forth in time taking millennials back to their childhood who will have watched this on VHS with their families.  Today millennials can be seen and heard talking about fond memories and reciting filmi dialogues as they recall these moments and reminisce. Such is the power of Hindi cinema.

Today I often see Sholay memes, like the ones below, using Gabbar and Kaalia as punch lines for jokes. The dialogues and characters have now found a virtual home. 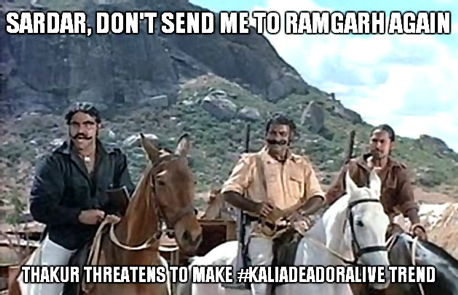 When I was younger Basanti and Dhano (her horse) were my favourite duo. Now that I’m grown its Gabbar. Maybe when I’m older (depending on how desi aunty I get) it will be Thakur as I sip on my elachi chai and threaten disobedient children with my Thakur like chappal! The characters and their dialogues grow and age with us. They find a way to evolve through different modes of communication: comedy, memes, spoof videos, our conversations and so on. Sholay is a movie that has been loved beyond India and celebrated beyond the diaspora. Its filmi dialogues and lyrics live on in countless languages versed by people from different nationalities. One of my memorable scenes in Sholay is when an aggrieved Veeru talks of his emotional torment at the hands of Mausi when he is drunk, using humour and Hinglish (Hindi and English).

It is such a funny scene fusing both English and Hindi together, maybe Sippy was giving a nod to Slanguages before its time – celebrating the mixture of languages.

The conference call for papers is open to film-goers, academics, students and writers. All you need to be able to do is demonstrate a keen interest in Hindi Cinema and the film Sholay. You must explain the basis of your discussion for the paper in a 250-300 worded abstract ready for submission by 30th November 2019. For further information see: http://www.vcinemashow.com/call-for-papers-sholay-at-45-birmingham-city-university-uk-april-8-2020 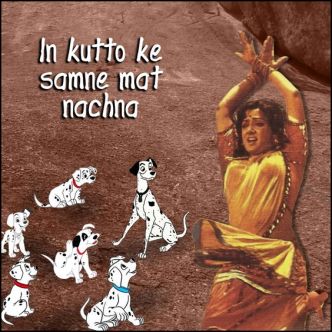 That’s one way of getting the message across to Basanti! Found via Pinterest

iThere are no comments